A 3-year-old girl was shot dead Saturday in the camp's Brazil neighborhood, from which troops had withdrawn the day before, Palestinian hospital officials said. Relatives said Rawan Mohammed Abu Zeid was killed by a gunshot to the head as she walked to a shop.

"We were playing in the house when she told me she wanted some candy," said her brother Diyab Abu Zeid, 19, crying uncontrollably on the telephone. "The older kids in the neighborhood were going to the store so I let her go with them. "

"There was no one in the street but the kids, not even other adults," he added.

The army said it had no reports of shots being fired in the area.

(2004-0514) 「捕虜虐待は 9・11 より悪い」ヴァチカンの外相。
Vatican: Iraqi Torture Worse than September 11. Vatican Foreign Minister Archbishop Giovanni Lajolo emphasized earlier today that the torture of Iraqi prisoners in U.S. custody is a worse blow for the U.S. than the September 11 attacks.
Lajolo gave an interview to one of Rome's most prestigious newspapers, La Repubblica. He said that the vehement blow of September 11, 2001, that killed 3,000 people was plotted by terrorists; whereas, toady, the U.S. is tarnishing its image on its own by torturing Iraqis.
それに対し「もし世界に性的虐待に関して語る権利の無い人間が居るとしたら、それはヴァチカンである」との反論も。
NY pol blasts Vatican 'hypocricy' for Iraq abuse protest. "If there's anyone in the world who has no right to speak on sexual abuse, it's the Vatican"
→ アメリカのボストンの方が責任があると思うのだが、、、いずれにせよ、あんな虐待をするようでは、戦争の大義名分もへったくれも無い、というか、アルカイダとサダム・フセインを結びつける証拠は最初から無い。そして大量破壊兵器は今も見つからない。

英軍の虐待と虐殺の報道 by ロイター。Britain Says 'Abuse' Pictures Not Taken in Iraq. Government officials admit the wider saga is far from over, as damning reports from the International Committee of the Red Cross and human rights group Amnesty International have raised a catalog of concerns about UK forces' treatment of Iraqi prisoners and civilians.
Ingram also remains under scrutiny.
In parliament last week, he said he had received no "adverse" reports about the conduct of British troops.
But Amnesty says it wrote to Ingram late last year about British troops killing Iraqi civilians -- including an eight year old girl -- when they posed no apparent threat. The group said the minister acknowledged receipt of the letter.
何ら脅威を与えていなかった 8 才の少女を英軍が殺した事は昨年報告済みとの事。 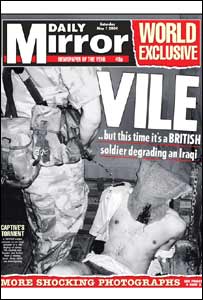